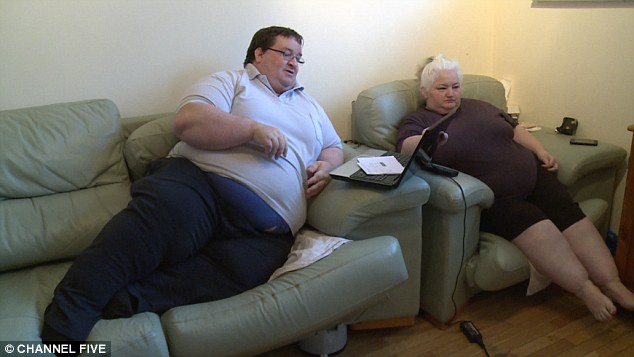 With a combined weight of 54st, they say they are ‘too fat to work’.

But that did not stop Stephen Beer, 45, and wife Michelle, 43, being able to splash out £3,000 on their wedding – as the bill was footed by the taxpayer.

The couple’s big day – which saw £1,000 spent on catering, including £450 for their favourite kebab takeaway for the evening buffet – was funded almost entirely from benefits.

Mr Beer, who was marrying for the sixth time, weighs 31st and had to have a suit specially made for the occasion.

By contrast his 23st wife became a bride for the first time and wore a white gown for the registry office ceremony and church blessing that followed.

Their 50 guests were treated to a three-course meal at the reception, followed later by the buffet.

The groom, who suffers from type 2 diabetes, hypertension and other problems linked to his weight, had a blood clot on the lung and instead of a honeymoon he spent nine days in hospital.

He can only stand for a limited period before becoming breathless and his wife said the wedding day trip to hospital was no surprise. Mrs Beer, who has not had a job during her adult life, said: ‘I reckon Stephen will be on benefits for most of his life.’

Mr Beer used to run a cleaning business and had to give up work six years ago following a stroke.

Interviewed about his benefits on the documentary, he said: ‘Is it right? Of course not. But at the end of the day I did work. I have worked, I haven’t sat on my a*** all the time.

‘I have done some work and so really, why not?’

via Too Fat To Work couple who weigh 54 stone between them claim £2,000 a month in benefits | Daily Mail Online.

Overweight people will receive cash or gift vouchers if they lose weight – as long as they have jobs.

Under radical NHS plans to tackle the obesity crisis employers will get funding to offer ­incentives for staff who slim down.

But top doctor Clive Peedell said: “This policy will do nothing to help the millions of unemployed and the growing numbers of self-employed people who may need help but won’t qualify.”

Outlining the plans, NHS England chief executive Simon Stevens pointed out that such schemes had been a success in America.

He said: “Employers in many countries have voluntary schemes for employees where, for example, you actually get cash back based on ­participation in Weight Watchers or other type schemes.” Britain’s obesity epidemic, which sees NHS hospitals dealing with 1,000 cases every day, is a reversal of the traditional problem when children were undernourished. Increasingly social workers find youngsters being fed a high-fat, sugary diet, which can be just as bad for their health.

The phenomenon is known as “killing with kindness” because the child craves the unhealthy food and a loving parent feels unable to say no.

Professionals say they have to make complex decisions in care proceedings and a family’s gross over-eating can be one of the factors that leads to them losing their children.

A Sunday Express survey of councils found that in the past year five children were taken from their families for that reason: two in Wake-field, West Yorkshire, one in Oxfordshire, one in Salford and one in Hounslow, London.

A social worker said: “Only in extreme cases would we take a child into care just because of their weight as we would seek to work with the family to improve their eating habits.”

Ex-Chief Medical Officer Sir Liam Donaldson warned in 2006 that health chiefs would look at removing children from their families if they became super-sized, risking their health.