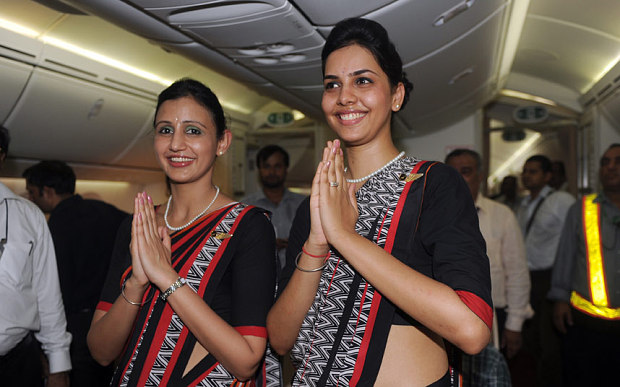 The national carrier of India, Air India, is grounding around 130 flight attendants after measuring their BMI body fat levels

Air India last year warned 600 of its 3,500 cabin crew to lose weight within six months or risk being taken off flights and given a job on the ground. The airline now plans to remove about 130 from cabin crew duty because their body mass index (BMI) levels remain above the prescribed limit.

A BMI is a measure of body fat based on a person’s height and weight.

India’s national carrier has grounded the staff for having an above “normal” BMI  Photo: Getty

After the state-run airline’s staff were tested last year, the 600 found to be “overweight” or “obese” were declared “temporarily unfit” for flight duties and asked to undergo clinical examinations and lose weight by changing their diet and lifestyle and exercising more, while being monitored by staff.

“About 130 of them failed the reassessment,” an Air India official told The Telegraph in Calcutta. “We are now declaring them permanently unfit for their job as flight attendants.”

“People who are fitter can respond quicker and more efficiently in case of any untoward situation.”

This is not the first time Air India has removed staff from the air for being overweight. In 2009, the airline ground 10 flight attendants who failed to slim down.

In 2013, Air India said that deploying female flight attendants rather than male could save them about £329,000 per year in full costs because they weight on average 33 to 44 pounds lighter.

A member of the All India Cabin Crew Association said the grounding of 130 staff was “ridiculous”, according to The Telegraph.

“Any industry insider would vouch that Air India flight attendants are the best, mainly because of their long experience. So, this guideline and the management’s decision to follow it to the letter is unacceptable.”

The airline has had a difficult year, with a special recruitment day in March welcoming zero attendees. It has also suffered from financial difficulties in recent years, with a government bailout necessary to keep the carrier afloat in 2012.